The art of Cooking Separately 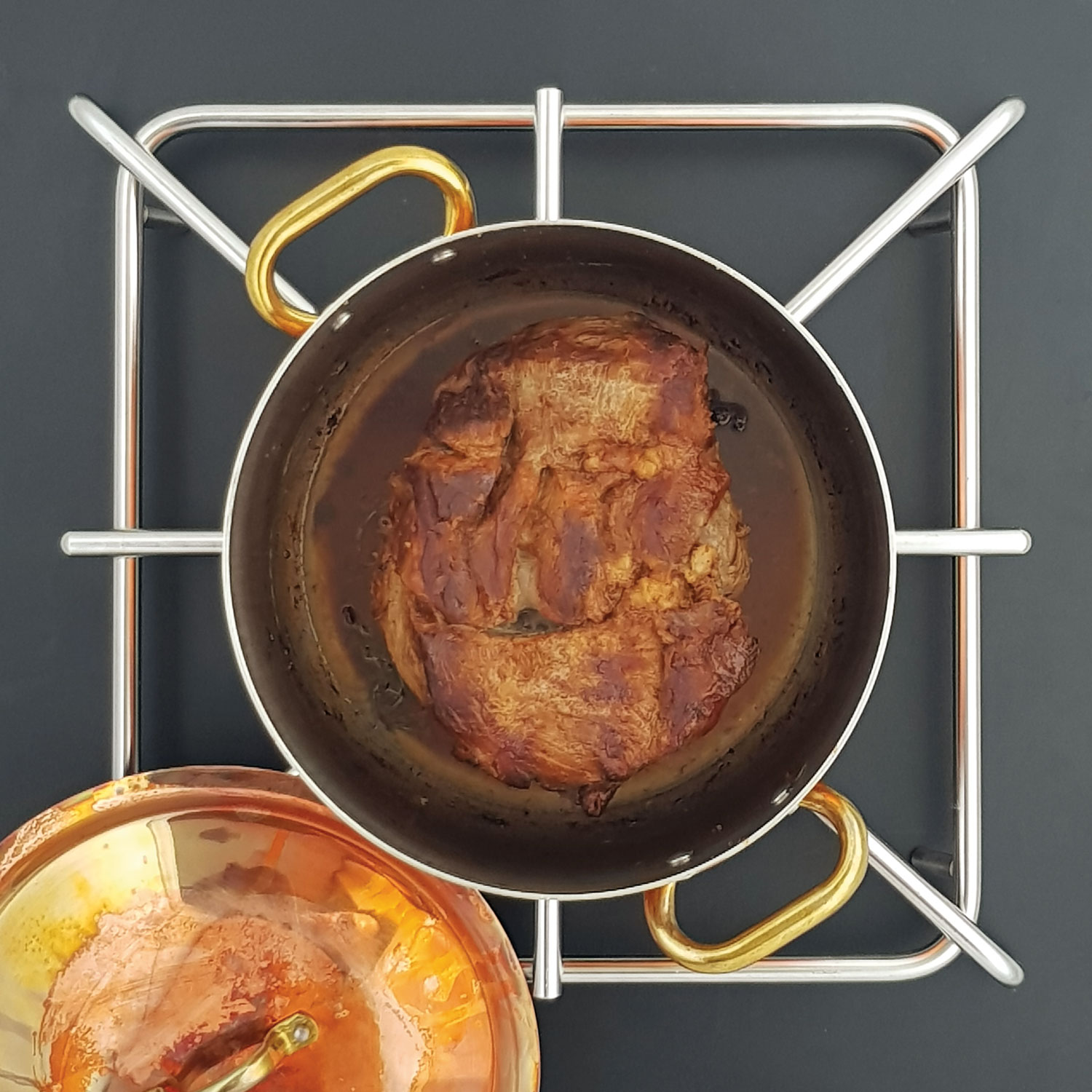 The difference with copper saucepans lies in the fact that you don’t need to add any liquids during long cooking processes.
For instance, a veal roast can caramelize for the whole length of the cooking process without requiring water or broth to prevent it from burning. Indeed, this is the difference between copper and aluminium: aluminium’s temperature rises well over 180° in absence of water; on the other hand, copper over low heat maintains temperatures below 180° even without water. Copper thus allows us to caramelize for very long periods of time, which is the perfect technique for cooking meats which require long cooking times.
You will obtain a deep, amber-coloured, tasty caramelization.
Moreover, these techniques guarantee a low-temperature, damp, prolonged internal cooking, perfect for melting the connective tissue.
With cuts of veal such as shoulder clod, heel beef and tail, you will achieve melt-in-the-mouth roasts thanks to the transformation of connective tissue into collagen, in addition to the long caramelization enabled by the copper.
Indeed, this is the difference between copper and aluminium, and the reason behind copper’s hefty price. You can obtain similar results with aluminium, provided that you have the patience to prevent the roast from sticking to the saucepan by continuously adding small amounts of water to allow caramelization and avoid burning. Copper makes this process natural, much less burdensome, and guarantees successful results.

Ingredients: one 2kg tail, or one 1,5kg heel beef, or one 1kg shoulder clod. All three are beautiful cuts of meat, but my favourite is the shoulder clod, 30gr butter, 1 sprig of rosemary, 2 garlic cloves, crushed, unpeeled, salt to taste, 20ml Brandy (also used in the Shrimp Soup Venezia recipe)

Skim the butter. When it turns an amber, hazelnut colour, it will have reached 180°. Add the meat and brown over low heat for 20 to 30 minutes on the first side, then flip the meat and brown the second side for another 20 minutes, always keeping the flame low. When the veal is browned on all sides, add the rosemary and the crushed unpeeled garlic, season with salt on both sides, pour in the brandy and cover the saucepan.
Cook the meat until very tender over low heat, flipping it every twenty minutes.
The meat won’t stick nor burn, but it will turn an amber colour. The only liquids we use are those contained within the meat, which will be let out slowly during the cooking process.

As long as the butter sizzles, it contains water. Its temperature thus won’t rise over 100°, and nothing browns at this temperature.
You should never add too much fat when browning meat, so as to ensure that the meat touches the metal at the base of the pan directly, with no fat in between.
Also, you shouldn’t move the meat around the pan too much while browning it, in order to prevent the meat’s juices from seeping out and lowering the pan’s temperature to 100°.
When browning meat, you must find the lowest temperature possible below which the fat stops sizzling.
The longer you brown the meat, the more intense the roast’s flavour will be.
During the cooking process, aside from the juices of the meat and of the pan, we will also have the element of the connective tissue, which will melt into collagen and make the roast’s surface particularly tasty and doughy.

Suggest a topic for a future newsletter: